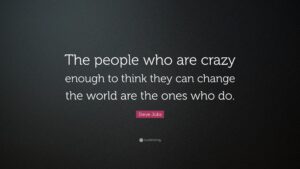 Think Bigger: It is not easy but, over the years, I’ve trained myself to pay more attention to information that stands in opposition to an existing belief. One assumption I have held is that plant-based “meats” will negatively impact the sale of tradition meat. This may still happen in the future but, according to this article, there isn’t much proof that plant-based proteins are causing the public to switch away from meat.

Think in Questions: The Nobel laureate in physics, Niels Bohr, once famously quipped, “Prediction is hard, especially if it’s about the future.” With this quote in mind, now contemplate the following article, “The past, present and future of robotic surgery.” It is entirely possible that robotic surgery will be a big trend. It, however, may not and the reason could surprise you: Even though the robotic surgery may ultimately be faster, more affordable and more effective than traditional surgery, people may still opt not to use it simply because they are not comfortable with the technology.

Think Different: Last week, I told you about “floatovoltaics”–a type of floating solar panel that sits on the ocean. Now, researchers in Australia, have created a different type of power generator–a “blowhole.” I’ll let this article explain how it works, but I’d encourage utility executives (in coastal areas at least) to look into the technology.

Think Green: The “circular economy” may seem to be a pipe-dream to many people, but a small community in Japan is inching toward the goal. Unlike the rest of Japan which only reuses and recycles approximately 20 percent of its waste, the community of Kamikatsu reuses and recycles almost 80 percent of everything it uses. The system is not yet perfect, but it is better than most communities. More importantly, it proves we can all be doing better.

Think the Unthinkable: Last year, I wrote an article for Forbes entitled, “The Legal Rights of Nature” in which I discussed the growing trend of natural resources being granted “legal personhood.” Soon, legal personhood for animals could also become established in law. This article about “Happy” the elephant is fascinating and I encourage you to think about its implications for farmers, lawyers and the rest of humanity.

Think with Your Heart: Yesterday was the first official day of fall. In the spirit of the season, I encourage you all to use a few minutes of this week’s “Friday Future Fifteen” to reflect on deeper issues in your life. I penned this piece, The Many Shades of Fall, in part, for this purpose.

Afterthought: “The seven sins of modern society: politics without principle; wealth without work; commerce without morality; pleasure without conscience; education without character; science without humanity; and worship without sacrifice.” Mahatma Gandhi